The ½ ponde (half pounds) were first minted in 1892 and as with all ZAR coins, portray the bust of Paul Kruger on the obverse (front) and the coat of arms of the ZAR on the reverse (back).

The ½ (half) Ponde as with the Een Ponde (1 pounds) were originally minted by the Kaiser mint in Germany and thus portrayed the incorrect coat of arms on the obverse of the coin, namely the double shaft or continental ox wagon.

In 1893 most ½ (half) ponde were minted with the original 1892 dies and the dies were only changed much later in 1893. No records were kept on how many ½ Ponde were minted using the 1893 ½ pond dies, although it is believed that very few 1893 ½ Ponde were actually minted.

The 1893 ½ (half) Pond is the rarest and scarcest, of the ZAR ½ Ponde and remains one of the most highly sought after numismatics in the world. When one looks at the amount of  1893 ½ ponde which have been graded, it can be seen just how few of these coins have survived the years, as a total of only 91 coins  have been graded by either PCGS , NGC or SANGS.

ZAR or Kruger ½ (half) ponde were only minted up to and including 1897. The table below illustrates ZAR half (½) pond mintages. 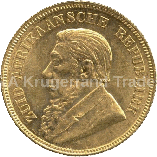 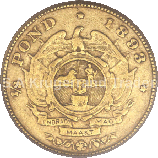