The 2016 Eureka Diamond Krugerrand Launch Set commemorates  150 year anniversary of discovery of the 21.25 carats (4.250 g) Eureka Diamond. Its discovery near Hopetown on the Orange River in 1866, Star of Africa (discovered after the Eureka) lead to the diamond rush, and marked the beginning of South Africa’s Mineral Revolution.
The Eureka diamond changed hands many times for over a century and was finally purchased by

De Beers in 1967, placed in the Kimberley Mine Museum, and gifted to the people of South Africa. Although the Eureka is not the most valuable diamond to come from South Africa, it is the single most important diamond in South Africa’s history as it was the first to be discovered.
The South African Mint celebrates the discovery of this first and most important diamond on the mintmark of the 2016 Krugerrand which is found on the reverse of the Eureka 150th anniversary Krugerrand. The launch set consists of the 1oz Krugerrand as well as a 1 oz sterling-silver medallion.

The obverse of the 1 oz sterling silver medallion portrays the image of a diamond while the reverse has the wording “150 years, 1866 - 2016, The discovery of the Eureka Diamond.”

A maximum of only 300 - 150th Anniversary Eureka Diamond launch sets were minted. 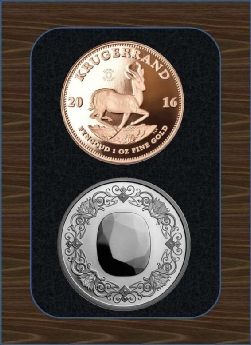