The iconic Krugerrand is celebrating its 50th anniversary in 2017. The striking of the first Krugerrand on 3 July 1967 took place with little ceremony. The Krugerrand was a world first, its intention to make gold ownership possible to ‘the man on the street’.

The name ‘Krugerrand’ was derived by combining Paul ‘Kruger’, President of the original Zuid Afrikaanse Republiek, with the ‘rand’, the monetary unit of South Africa. The rand is also linked to the Witwatersrand, a name meaning ‘the ridge of white water’, an important gold-producing area.

The obverse design of the 1 oz gold 50th anniversary vintage Krugerrand features the bust of President Paul Kruger, modelled by die-engraver Otto Schultz and struck from the original die used in 1892 for the historic Kruger half-crown (2 ½ Shilling) coin.

The reverse, featuring the springbok, was designed and engraved by sculptor Coert Steynberg and first used on the 1947 5-shilling coin.

This 1967 vintage coin was manufactured using reproduced dies from the original tooling used to manufacture the first Krugerrands in 1967, and the privy mark

‘LT SARB 2017’ was added just below the bust of Paul Kruger to authenticate it as legal tender. 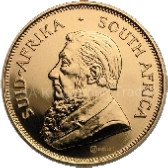 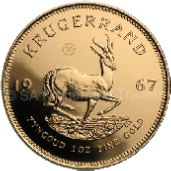 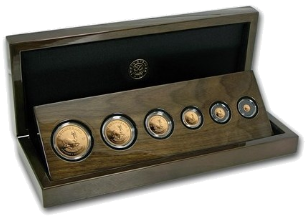 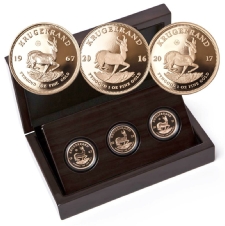