Mr Nelson Rolihlala Mandela and Mr Frederik Willem de Klerk for their contribution for the peaceful termination of apartheid and for laying the foundations for a new democratic South Africa. Despite their different points of view , Mandela and de Klerk had reached an agreement for a transition to a new political order based on the tenet of one man-one vote. Through their common vision of reconciliation and not by looking back at the past, they had shown personal integrity and great political courage. Their constructive strategy for peace and reconciliation also pointed the way to the peaceful resolution of conflicts elsewhere in the world.

The Nobel Peace Prize for 1993 was jointly awarded to Mandela and de Klerk in recognition of their efforts and as a pledge of support to the forces of good, in the hope that the advance towards equality and democracy would reach it’s goal in the very near future.

This became a reality in 1994 with the formation of a new democratic South Africa.

When Nelson Mandela bade farewell to parliament five years after he was sworn in as South Africa's first democratically elected President, he urged South Africans never to forget their past but to use it as a tool in overcoming the challenges still facing the country.

F.W de Klerk who retired from politics in 1997, praised all South African’s for their role in bringing about change in the country, asking them to join hands for

Mr Mandela and Mr de Klerk. The obverse of all the 2007 Protea coins portray the King Protea as well as the year 2007, the year of mintage 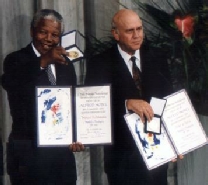 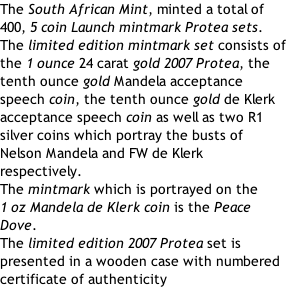 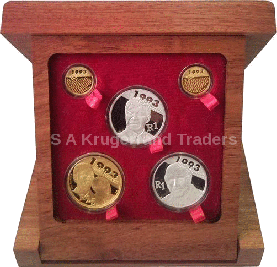 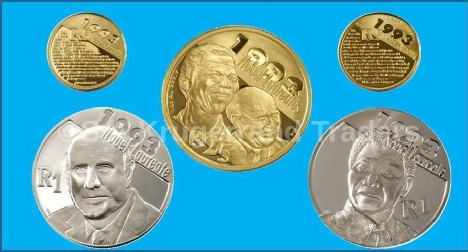