Commemorating the 20’th Anniversary of the release of Nelson Mandela 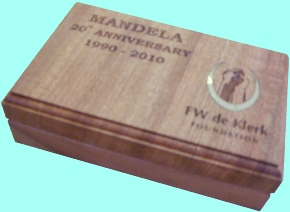 On the 2nd February 1990 then State President F.W de Klerk made the announcement that that Mr. Nelson Mandela would be released by saying: “I wish to put it plainly that the government has taken a firm decision to release

Mr. Mandela unconditionally. I am serious about bringing this matter to finality without delay. The government will take a decision soon on the date of his release.”

Mr. Nelson Mandela was released from prison on

11 February 1990, and to commemorate this historical event of the 20’th anniversary of the release of Nelson Mandela, the Mint of Norway have minted a total of 1990, ½ ounce

The obverse of the 24 carat gold anniversary medallion depicts the bust of Mr. Nelson Mandela with the inscription “Nelson Rolihlahla Mandela” as well as the now famous words “A Long Walk To Freedom”

The reverse of the 20th anniversary Mandela has the now famous words which Mr. F.W de Klerk used when announcing the release of Mr. Nelson Mandela, “Walk through the open door. Take your place at the negotiating table.” 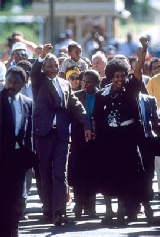 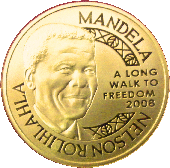 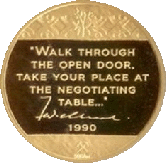