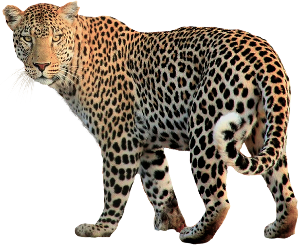 The name "leopard" is derived from the Greek word leopardus, which is a combination of leon (lion) and pardus (panther).

Leopards are large animals from the cat family recognized by their golden, spotted bodies and known for their graceful, yet ferocious hunting techniques.

The Leopard grows from 92 to 190 centimeters long, with the tail adding another 64 to 99 cm to their length.

The males and females vary in weight, with females weighing in at anything between 21 to 60 kilograms, while males can weigh between 36 to 75 kg.

Leopards are solitary creatures that only spend time with others when they are mating or raising young  and are also nocturnal and spend their nights hunting instead of sleeping.

The Leopard is mainly an ambush predator, and will crouch while sneaking up to its prey, and will kill its prey with a swift bite to the neck, instantly breaking it.